The chicken meat firm Hyza, owned by Andrej Babiš, which used to own the lorry in which 71 refugees suffocated in Austria last week, ran an anti-immigrant TV advert on Slovak TV. In the TV advert, a happy Slovak family eats a happy Slovak chicken, then they become wary when there is a warning on TV against an impending invasion of immigrants. These are supposed to be the unsavoury foreign chickens.

Andrej Babiš owns large parts of Czech and Slovak food industry. He is the Czech Deputy Prime Minister and Finance Secretary. His private businesses receive government contracts from the Finance Ministry that he controls. Last week, Babiš demanded that the Schengen area should be sealed and that NATO troops should be sent to tackle the refugee crisis.

Here is the anti-refugee "chicken TV advert". For an English translation, see below:

Immigration officers have unmasked illegal immigrants! They presented documents which lacked information about their country of origin. An excessivfe amount of unknown substances were found in the boot of their vehicle! The immigrants were arrested, interrogated and detained. [Sign: DEPORTED!!] Beware of rubbish!

Female voice: Indulge yourself and your nearest and dearest in the authentic, Slovak, Hyza chicken!! 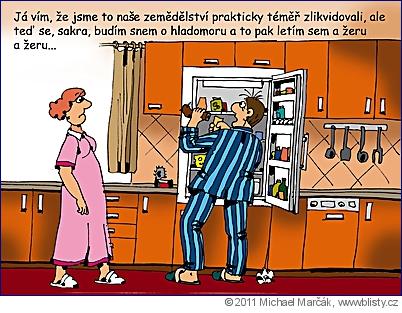