Donald Trump has invited Miloš Zeman, the islamophobic president of the Czech Republic to visit the White House

On Tuesday 6th December, Donald Trump spoke by telephone with  Miloš Zeman, the islamophobic and populist president of the Czech Republic, says a  press release from the Czech Presidential Office (in Czech)  HERE.

In the telephone conversation, Trump expressed his appreciation that Zeman "was the only European president to publicly support him" before the US presidential elections in November. Trump has invited Zeman to visit the White House. The visit is to take place in April 2017. Trump has accepted Zeman's invitation to the Czech Republic. (One of Donald Trump's former wives was Czech and his children are half-Czech.)

The Czech president Miloš Zeman stands seriously apart from most Czech politicians due to his strong xenophobia and islamophobia. Many commentators point to the fact that Zeman is, in fact,  Europe's answer to Donald Trump. Zeman has been disseminating hate speech, making strongly anti-islamic, unsubstantiated  public statements in order to whip up popular support for himself.   He has been condemned for this by UN High Commissioner for Human Rights Zeid Ra’ad Al Hussein for disseminating hate.

Last year during the Czech National Day on 17th November, President Zeman sang the national anthem on stage with a proponent of concentration camps and gas chambers for muslims:

Zeman has been repeatedly warning in public against what he sees as the "menace of islam". This is one of his notorious statements:

"Unfaithful women will be stoned, thieves’ hands will be cut off and we will be deprived of the beauty of women because they will have to have their faces covered. I can imagine that in some cases this might be beneficial, though."

Here is a selection of some of other recent statements by president Zeman:

The UNHCR educational project about the refugees, which uses a comic and a film to allow schoolchildren to feel what it is like to be a refugee, is idiotic and dangerous, says Miloš Zeman

Miloš Zeman recommends that Czech citizens should be afraid of terrorist attacks and should obtain guns,

Miloš Zeman: "Muslims would not work, they only come for welfare payments" 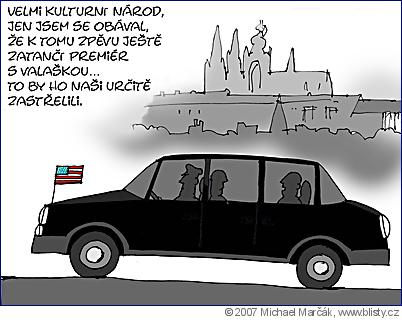