As a result of anti-refugee hysteria, which is being disseminated by the media in the Czech Republic, Czech citizens, fearing "dangerous foreigners", have made a number of increasingly bizarre complaints to the Czech police. On 14th September, a young woman from the Pilsen region in Western Bohemia was horrified when en route to school she saw a "dark-skinned man in black overalls with a white cap and a long machine gun over his shoulder". She reported him to the police who discovered that the "foreign terrorist refugee" was a chimney sweep. The "machine gun" was a long brush for sweeping chimneys.

A man from the Chrudim region who said proudly that he can recognise the "hostile refugees" very well because he has spent several years in England, reported that a "group of refugees are building an underground bunker in the local forest". A police spot-check discovered that the "terrorists" were regular forest workers who were cutting down the undergrowth.

In the South Moravian town of Uherské Hradiště, the brave local police arrested a group of eleven dark skinned foreigners who did not have their passports on them. It turned out that they were a folk lore group from Benin who came to the Czech Republic to participate in an international folklore festival in the town of Strážnice. They had just stepped out from their hotel without taking their passports with them.

Several times the worthy Czech citizens have reported various "evil refugees" to the police, who then discovered on checking them that they were regular agricultural workers from Slovakia or Romania. The number of police spot checks of non-whites has considerably increased over the past few weeks in the Czech Republic.

Statements on Facebook, which have originally been meant as a joke, take on a different life and become viral. Thus a group of Facebook activists who are trying to fight against islamophobia declared on Facebook that it was an outrageous proof of islamicisation of the Czech Republic that "according to information from the Czech Education ministry, first form pupils will be required to learn Arabic numbers this year!" The status produced a large number of angry comments from the Czech public demanding that the bloody Arabs should be forced to learn European numbers. The authors of these comments did not realise that Europe has been using Arabic numbers for centuries. 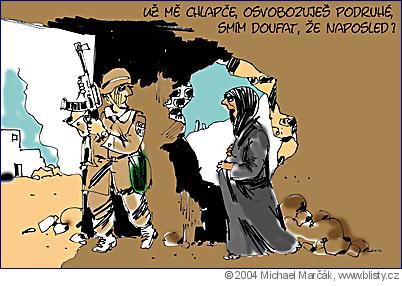