Prague Municipal Authority: "Bringing a set of gallows to a demonstration cannot be seen as threatening behaviour"

The man who brought set of gallows to a Prague anti-refugee demonstration in July 2015 has not committed any offence. According to a verdict issued by the Prague 1 Municipal Authority Mr. Vladimír Heřman, who brought the gallows to the demonstration, did not thereby manifest any malice or evil intent. Mr. Heřman has not infringed the law governing public demonstrations because he did not use the gallows as a weapon.

"We have been unable to conclude from the behaviour of the participant in the demonstration that these things were intended to be used for violence or for threatening behaviour," said the spokesperson of the Prague 1 Municipal Office.

Mr. Heřman was originally investigated by the police, who did not charge him and passed on the case to the Prague 1 Municipal Authority to deal with it as a possible minor offence.

Demonstrators carried several sets of gallows at an anti-refugee demonstration in July 2015 which started at Prague's Wenceslas Square and then moved to the Czech government office. There were inscriptions on the gallows saying TRAITORS! THIS IS TO BE USED FOR HIGH TREASON! EU = SOVIET UNION! CZECH NATION, RISE UP! IT IS FIVE MINUTES AFTER 12! 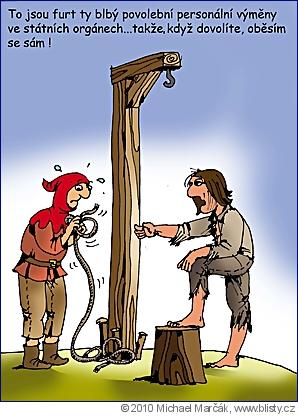