After Martin Konvička, the head of the Anti-Islamic Bloc, has been charged with "inciting hatred against a group of citizens", Czech President Miloš Zeman has been displaying signs of dissociating himself from him and his organisation. On 17th November 2015, on the day of the 26th anniversary of the fall of communism, Zeman attended an Anti-Islamic Bloc rally at Prague's Albertov university quarter and he and Konvička sang the Czech national anthem on stage together.

Now, Jiří Ovčáček, the presidential spokesman, says that "Mr President absolutely does not share Mr. Konvička's views", adding that Zeman is not planning to make a public appearance with the activists of the Anti-Islamic Bloc ever again. "Let the matter be investigated independently and without any political or media influence," said Ovčáček, pointing out that Konvička is being prosecuted for his earlier statements, made on Facebook, not for what he said at Albertov. 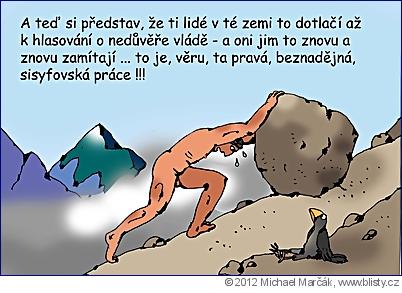