- War could bring an acute energy and economic crisis to the whole of Europe, plus long-term destabilisation and marginalisation of European post-communist states.


According to the Russian side's announcement, a video conference between Putin and Biden regarding the Ukraine crisis is scheduled to take place on Tuesday. Judging by the positions presented so far by both sides, it is very unlikely at this point that there will be a major breakthrough. The Russian side is making demands regarding 'legal guarantees of non-proliferation of NATO' that it knows full well cannot be met - and, given its own failure to respect the legal guarantees of Ukraine's territorial integrity, it basically seems to be saying that it expects better behaviour from the West than from itself.

The whole affair looks more like an attempt to blame Kiev and NATO for the war of aggression that Moscow is busily preparing for.

If Ukraine does not surrender its sovereignty and the West does not sink it, the likelihood of conflict will be considerable, despite the voices of superficially informed sceptics. At some levels, Russian preparations for an invasion have been underway since the spring, with orders for concrete planning for the operation issued in October, according to Western intelligence. The state of the Russian media does not inspire any optimism, and there is a massive public massage preparing the public for the 'inevitable' war, not perhaps with Ukraine itself, but with the West.

So what would a possible war bring to Europe, and hence to the post-Communist countries of Central and Eastern Europe?

Immediately with the outbreak of war, an influx of several million Ukrainian war refugees into Europe can be expected. The intensity of the fighting would make it very difficult for civilians to stay in war zones, and no one can be surprised if they take flight westwards. Poltorak, Poroshenko's former defence minister, estimates that in the event of a high-intensity conflict with Russia, up to 10,000 Ukrainians could lose their lives every day (some 14,000 have died so far). This estimate is unfortunately very realistic.

The first in line would, of course, be the countries immediately neighbouring Ukraine, i.e. Poland, Slovakia, Hungary and Romania. However, a certain number of refugees would certainly head further west.

One must take into account the generally 'anti-refugee' mood of the European public, especially in the post-communist countries, the traditional propaganda of Russia and its fifth column pointing out the 'Ukrainian fascism' of the refugees, and the undoubted exploitation of the fact that Ukraine is relatively badly affected by the coronavirus pandemic with a relatively low vaccination rate. If a war does take place, it will happen in the middle of winter with the European coronavirus delta wave peaking and the omicron coming on, further limiting the effective sympathy of the European public. European states may partially or completely fail to help these people, and civil society, especially charities and public collections for the benefit of refugees, would then have to take their place, quite possibly directed by minority sections of host societies.

Other Ukrainian warnings seem less realistic. Although Ukraine and Russia are important exporters of grains, and making their production unavailable (Ukrainian due to the conflict, Russian due to the ensuing international sanctions) could have a significant impact globally, Europe is not a major importer of this commodity and, generally speaking, is more or less self-sufficient in a normal year (more on this below). The only exception is perhaps the dependence on maize imports, which is particularly significant in the case of the Netherlands, Spain and Portugal. In short, the Czech Republic does not import much grain.

The trouble is that we are no longer living in a 'normal year'. This year's sharp fluctuations in natural gas prices, due to Russia's reluctance to increase supplies and even the targeted creation of shortages on the European market, have led, among other things, to an increase in the price of synthetic fertilisers made from natural gas. Corn growers in particular are very significant consumers of these fertilisers. And there are signs that many have sown other crops precisely because of the rising costs. To what extent the overall crop mix could eventually shift and whether there is therefore a risk of a maize shortage in Europe this year is a question for agricultural market experts, not for general security analysis.

Europe may be far more threatened by market reactions to war than by hypothetical outright grain shortages. The possible unavailability of Ukrainian and Russian production would create a significant overall demand surplus that would cause world grain prices to skyrocket. In this case, however, the much-maligned EU Common Agricultural Policy could undoubtedly play an effective role as a cushion and limit the impact of rising world prices on the European consumer.

Far more significant than the direct repercussions of the conflict, however, could be the longer-term indirect effects.

Europe's great weakness is its heavy dependence on Russian energy resources, which, due to the bribery of many European politicians by Russian gas companies, has been virtually ignored in recent years, and this dependence  is explicitly mentioned in a number of key EU documents. If the Kremlin invades Ukraine this winter, however, it can say goodbye to the new Nord Stream 2 pipeline - in which case it can be expected to try to divert as many of its supplies as possible, especially to China.

In such a case, European transport would face a shortage of fuel for internal combustion engines. It would be slow and very difficult to  overcome thsi by switching to other suppliers. It would require an appropriate adjustment of the energy infrastructure. Coastal states can cope with the situation much better than landlocked ones. Indeed, do not expect to see oil tankers in the Czech ports on the river Elbe.

The shortfall in natural gas supplies may be even more severe. In fact, the replacement of a non-functioning gas heating and stove system without a long-term plan from one day to the next is practically only one: electric direct heating and electric cooker/stove. Even at current electricity prices, this smacks of a winter disaster in poorer households. To be honest, I don't think such a development has the potential to accelerate the green transformation of the European energy sector. It might even preserve existing energy mixes in the long term, including the use of coal.

However, the economic shocks might not be limited to those just mentioned. In the event of a new large-scale Russian aggression in Ukraine, the whole area of post-communist states in Central and Eastern Europe could start to be perceived as geopolitically unstable and economically unviable. The exodus of foreign investors from the Czech space, which started after Zeman's election and then intensified under Babiš, could accelerate significantly, and the deepening trend could reach the point of a capital shortage in the Czech economy. In such a case, the state would eventually have to intervene. I have no doubt that the Pirates or the People's Party would have no problem with something like a large-scale state investment programme, I think that STAN and TOP09, led by Marketa Pekarova Adamová, would eventually take a pragmatic approach to the matter, but I am not sure how the ideologising ODS would handle the matter. Particularly if such a programme included a plan for state housing construction.

Even if Russia, Belarus and Ukraine became the only participants in the conflict and if the conflict does not spread any further, there would be a massive shift of emphasis in the post-communist space and defence spending would become a much higher priority than at any time in the last 32 years. (To a lesser extent, this will happen even if there is no war in the end.) This trend has already manifested itself in Poland and the Baltic states, partly in Romania, but after a new war in Ukraine it would undoubtedly affect the Czech Republic as well. Many of the needs have been seen for a long time and some, albeit a smaller part, are already being addressed, albeit not always satisfactorily: The purchase of contemporary tanks and heavy infantry fighting vehicles, the acquisition of mobile and powerful integrated air defense systems for armored formations (in addition to the renewal of territorial air defense systems), the numerical strengthening of available artillery support for units, a significant increase in effective range, survivability on the contemporary battlefield, and counterbattery firing capabilities of guns, the return of salvo rocket launchers to the arsenal of the Czech Armed Forces, and new and truly modern self-propelled 120 mm mortars, strengthening and diversification of the arsenal of modern anti-tank assets, including those with a longer range than those currently in place (the US FGM-148 Javelin is of priority interest to Russian tank defence system designers and the original version has an effective range of only 2,500 m), the purchase of modern attack helicopters, without which the fight against the enemy's tank superiority cannot be done, etc.

However, we could definitely forget about the economically pointless and completely useless Stalinist projects like Zeman's proposal for a Danube-Oder-Labe Canal.

It would be a mistake to think that any new war in Ukraine will not affect us, that we can somehow cut ourselves off from it, isolate ourselves, put barbed wire onto our borders, stick our heads in the sand.

The instinctive ostrich-like reactions of the Czechs, exploited intensively by the Czech Social Democratic Party and its recent head Jan Hamáček in recent years, cannot overcome the massive European security crisis that is slowly growing before our eyes in the Ukrainian borderlands. 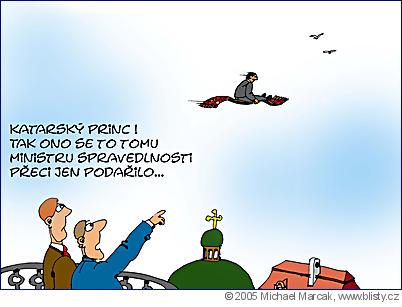