27 years after the fall of communism, the Czech Republic is now yet another post-communist country in East Central Europe which is sending out warning signals that democracy in this region is threatened.

Various international commentators, as far as Croatia or even Pakistan, have praised Sobotka's actions, commenting favourably on what seems to the outside world to be an attempt by the Czech PM to rid Czech politics of corruption. The problem is that the Czech voters are not particularly convinced by Sobotka's actions.


Some context is needed to explain the internal Czech political situation. Andrej Babiš is a powerful oligarch who owns most of the Czech food industry and also controls the two most important Czech newspapers, Mladá fronta Dnes and Lidové noviny.

Babiš became a serious political player in 2013, as a result of his frustration over the actions of the then right of centre government of Petr Nečas, which collapsed in June 2013 amidst serious scandals.

In 2011, Babiš entered politics by founding his right of centre, populist "ANO" party and in the general election in October 2013, ANO gained 18.7% of the vote and 47 seats in the Chamber of Deputies, attaining second place behind the Czech Social Democratic Party (ČSSD). A governing coalition of Social Democrats, the catholic party KDU-ČSL and ANO was finally formed in January 2014 and has ruled relatively successfully until the present time. The Social Democrats were given the post of Prime Minister, Babiš received the posts of Deputy PM and Finance Secretary.

The problem is that Babiš is not really a democratic politician. From the very inception, there was a number of conflicts of interest. Babiš came to rule the Finance Ministry which at the same time was expected to inspect  Babiš's enterprises. While assuming a couple of influential political posts, Babiš acquired two of the most influential Czech newspapers, apparently dictating to them what they should and should not publish.

Nevertheless, the Czech voters have given Babiš a considerable amount of support in recent years. It is not quite clear why Babiš should be so popular amongst a large part of the Czech voters, but a Trump-like factor has been probably at play here. Babiš speaks in simple, almost inarticulate language (being Slovak, he can hardly speak proper Czech), which seems to work as an anti-dote to the vacous pronouncements by establishment politicians, he declares that he runs the state "like a firm", is hostile to immigrants and refugees and wants to build a border wall against refugees (this is very popular with the Czech public, which is overwhelmingly xenophobic) and makes repeatedly a number of Trump-like pronouncements. He is also supported by the Czech populist extreme right-wing President Miloš Zeman.

Sobotka's suddent decision to dismiss Babiš has been received with a lot of scepticism and even criticism by both commentators and the general public in the Czech Republic.

The problem is that the popular support of Andrej Babiš and his ANO party has been growing steadily. At the moment, ANO is supported by approximately 30 per cent of Czech voters, while electoral support for Sobotka's social democrats is steadily decreasing. The Czech Social Democratic Party is now supported only by some 18-20 per cent of the voters.

A general election is to take place in the Czech Republic in October 2017 and it is widely expected that the Social Democrats will lose and Babiš's ANO will win and will be able to form a government without needing a coalition partner.

Within this context, many Czech voters saw Sobotka's decision to dismiss Babiš as an act of despair, the aim of which was to try to prevent Babiš and his ANO party from winning the general election in the autumn.

While Sobotka was probably right in accusing Andrej Babiš of corruption and of shady behaviour, the Czech general public do not find Sobotka's accusations convincing. Babiš may well be a bully and a crook, but why is it that Sobotka and his Social Democrats have  not been bothered  by this until now and have happily ruled the country in cooperation with him for more than three years? Many voters do not understand the technical complexities of the alleged fraudulent financial activities, which Babiš is allegedly guilty of, according to Sobotka.

Since Sobotka's decision to get rid of Babiš  the situation on the Czech political scene has become even more entangled. Vaccilating, Sobotka then decided that he would not sack Babiš "because that would turn him into a hero", and announced that his whole government would stand down. However, the Czech President Zeman, who sides with Babiš, has decided, quite  unconstitutionally, not to cooperate with Sobotka in any of this.

In the meantime, recordings have been published in which Andrej Babiš explicitly tells the journalists in his  newspapers what to write. These revelations, will probably harm Babiš's reputation much more than the accusations of his alleged financial irregularities. Many people were also shocked to see that President Zeman in his blatant attempts to side with Babiš and to damage Sobotka and his Social Democrats, was willing to infringe the Czech constitution.

The Czech Republic is not yet suffering by being ruled by an intolerant, authoritarian regime, which is the case in Poland and in Hungary. Nevertheless, it seems to be entering a period of instability and maybe even authoritarian rule, if  Babiš's ANO wins the general election in the autumn.

It is perhaps disturbing that many Czech voters do not seem to be bothered by the allegations of Babiš's allegedly  corrupt and illegal practices. However, most Czech voters would probably say that the whole Czech political establishment is corrupt and that both the right wing and the left wing Czech political parties have colluded over many years in creating an unjust  political system in which the police and the judiciary does not function properly and the political parties are nothing more but businesses who trade in political influence.  So why should the voters suddenly now believe the accusations hurled at Babiš by a social democratic PM whose electoral support is quickly dropping? 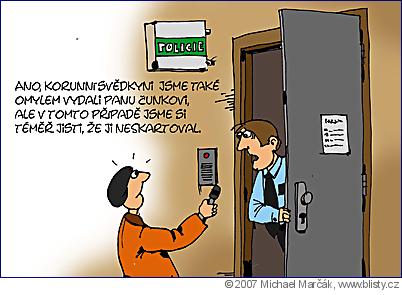