Prior to Angela Merkel's visit to Prague, Czech politicians have condemned her pro-refugee policy

The German chancellor Angela Merkel will visit Prague for a few hours on Thursday for talks with the Czech Prime Minister Bohuslav Sobotka. Prior to her visit, a number of top politicians from Czech mainstream parties have demanded that PM Sobotka should express a strong disagreement of the Czech Republic with Merkel's pro-refugee policy.

"President Miloš Zeman wants to discuss Brexit and its impact on the EU and the migration crisis and terrorism which is associated with it," said his spokespersom Jiří Ovčáček.

Andrej Babiš, the Czech Deputy PM and Finance Secretary, has called on Angela Merkel "to give up her political correctness and to begin to act". According to Babiš, Merkel should close the external border of the European Union. "In return for billions of euros, she should make sure that Greece and Turkey completely stop the arrival of refugees in Europe. Otherwise, it will be her fault what happens to the European population. Unfortunately, Mrs. Merkel refuses to see how serious the situation is in Germany and in other EU nations. Her attitude is really tragic."

"Islam is not part of modern Europe and its traditions. Radical islam is a threat. Uncontrolled masses of refugees do constitute a security threat," said Petr Fiala, the Chair of the right-of-centre Civic Democratic Party (ODS).

"I do not agree with Merkel's slogan ˇWe can manage this.' Europe cannot manage the arrival of several million migrants over the next few years. It is a cultural and social problem and a security issue. Already, the immigrants are being given preferential treatment, which is wrong," said Jan Bartošek, the Chair of the Czech People's Party. "We still remember the Soviet occupation and hence we want to be able to make free decisions about the future and the security of our citizens," Bartošek added.

Social Democrat Jaroslav Foldyna said that Mrs. Merkel's statements were "misguided". "Czech Republic will act wully in line with the V4 countries. We are willing to contribute to the building of refugee camps in safe countries. But we will not accept large numbers of refugees."

"No one can take seriously Merkel's assertion that there is no connection between refugees and terrorism. Cooperation between different civilisations of the world must be equal, one civilisation must not find itself on the defensive against another. We will not be bearing the brunt of the impact of the wrong decisions made by the government of the Federal Republic of Germany," said Vojtěch Filip, the Chair of the Communist Party of Bohemia and Moravia. 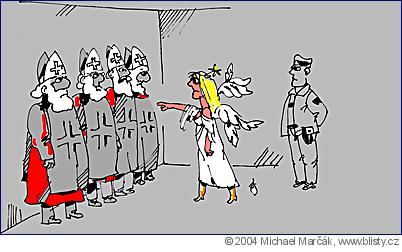