Martin Konvička, Chair of the Antiislamic Bloc, has lodged a criminal complaint against Czech Home Secretary Milan Chovanec. He accuses him of wanting to "spread contagious diseases in the Czech Republic by negligence". In the complaint, Konvička argues that the Home Secretary Chovanec exposes Czech citizens to the danger of contagious diseases by allowing refugees to enter the territory of the Czech Republic.

Jiří Vítek, the Chair of the Czech "Patriot" Party has accused the world media of "shameless manipulation" by publishing the pictures of three-year old Aylan Kurdi, who drowned in the sea when trying to reach Greece from Turkey. In Vítek's view, it is impermissible to use such pictures in order to further "ones own particular aims" and "to influence public opinion". In Vítek's view, EU politicians and incompetent "perverse demagogues and devious social engineers with a feeling of moral superiority and false mesianism". The only solution of the current crisis would be if they repented and supported the Syrian regime of President Assad and if they eradicated radical islam.

The US president Obama and the French president Sarkozy are "bastards", who have "competed with each other about who will do more harm. Now they are trying to force us, using the picture of the dead boy, to accept their own guilt". But the NGOs are "worst of all", says Vitek, because "they are not at all interested in immigrants, but in grants". NGOs are mere parasites." "Stop blackmailing us," says Vítek in his rant.

Statements and actions like these continue to legitimise intolerance, hysteria and racism in the Czech Republic 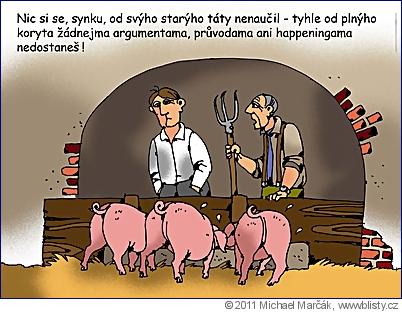