Matěj Stropnický, chairperson of the Czech Green Party and a councillor in the Prague municipality, published the following testimony on Facebook:

"I went to court on Wednesday to follow the case of a girl who was barred from studying at a secondary school for nurses because she wears a muslim scarf on her head. The court proceedings took place in the largest courtroom with 120 seats, and people were standing also in the corridor. It was obvious that they were organised, that they knew each other and that they knew the head teacher who had excluded the student from her school and that they were very supportive of the head teacher.

After more than about an hour a man sitting in the third row from the front with a motorcycle helmet on his head stood up. There was a sign on the helmet 'I want freedom to wear helmets, this is my religious conviction!'. A policeman asked him to take the helmet off, the man refused and started shouting. He called on those present: 'Those who support the headmistress should raise both hands, those who support hijab should raise one hand!' The police took him out of the courtroom. In response to this, the whole courtroom started to sing the Czech national anthem. The judge cleared the room."

After being excluded from the courtroom, the man called those present to join him for a "patriotic beer".

The extreme right wingers verbally attacked a small group of students who came in support of the expelled, hijab wearing girl. "There are Czech children living in this country, we need to protect them from female circumcision," shouted on of the supporters of the school towards the students. "You think you are living in some kind of Cloud Cockoo Land! You are allowing paedophiles to abuse our children!"

The secondary school for nurses vigorously defended the right to expell the student for wearing a hijab, saying that it has the right to determine how its students must be dressed. Czech Human Rights Obudsman Anna Šabatová has expressed support for the hijab wearing student pointing out that according to Czech law, the student has the right to be protected from religious discrimination. In the view of the Ombudsman, the rules of the school regarding student attire are in contradiction with the Constitution of the Czech Republic. The case continues. 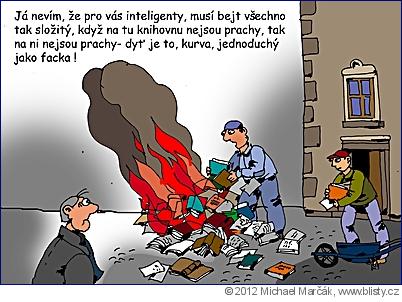