Czech President Miloš Zeman would veto the legalisation of marriage for LGBT people, if Czech parliament proposes it. In his view, the purpose of marriage is to enable the family to bring up children, he told the Czech alt-right TV station Barrandov. Zeman has nothing against homosexuals, he said, but a homosexual relationship can never bring up children. The state must support heterosexual marriages which do bring up children, he added. Czech parliament is currently debating the possibility of legalising marriage for LGBT pairs.

Zeman has also said  that he wants to award the T.G.Masaryk order to the catholic priest Petr Piťha, who in an incredible sermon last year railed against the Istanbul convention which bans violence against women and violence in the home.

T.G. Masaryk was "President Liberator", a humanistic politician, a philosopher and a feminist, who in 1918 presided over the foundation of independent Czechoslovak Republic. He is highly revered by most Czechs.

Petr Piťha said the following in his sermon last year:

"Freedom either exists, or it does not and then it is non-freedom," he said. "We are now supposed to succumb to the pressures of a powerful pressure group of gender activists and homosexualists and to make non-freedom law. Your families will be torn apart and destroyed. This will happen whenever you will say to your children that a man and a woman are not identical. They will take away your children and will hide from you where they have put them, where they are imprisoning them. A false accusation will be enough for this. It will no longer be allowed to determine the sex of your new-born children by looking at their crotch. The child himself or herself will be deciding what its sex is. This is why you will be forced to bring up your children as sexless beings and you will not even be allowed to give them names. Whenever you express disagreement, you will be deported into corrective and educational labour camps of a genocidal nature. Homosexuals will be proclaimed to be a superior ruling class. You will become a part of an inferior auxiliary class and you will be forced to work according to the orders of powerful elites which will be determining what can and what cannot be said in public. You will be made subordinate to all animals who multiply by means of sexual intercourse because no laws will be imposed on cats, frogs or insects."

As can be seen, President Miloš Zeman is a serious destablising influence in the current political system of the Czech Republic. According to a CVVM opinion poll from December 2018, Zeman's popularity in the Czech Republic has recently grown to  50 per cent. Many Czechs revere the office of the President of the Republic, which legitimises its holder. Regrettably, Zeman is not a statesperson who would support basic human rights and civilisational values. He legitimises extreme views and paralyses the value system of the Czech Republic. In this, he is no different from other Europen alt-right politicians who rule in Italy, Poland, Hungary and Austria. 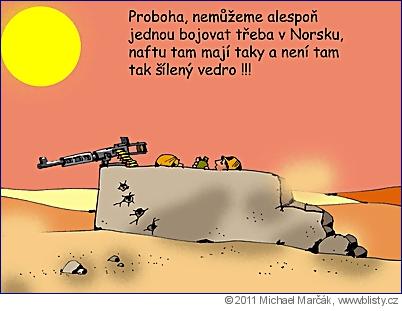