District Court for Prague 10 started to deal with a complaint made by a student with Somali roots who was ordered not to wear a hijab during classes at her Czech secondary school. Dozens of people came to give support to Ivana Kohoutová, the headmistress of the Secondary Health Service School in Ruská Street in Prague, who issued the order forbidding the student to wear a hijab. There were also dozens of people supporting the student.

Two representatives of the Czech right wing Civic Democratic Party, former secondary school headmaster Václav Klaus junior and former dissident František Stárek protested against the student´s complaint. "When a child is from a minority, it is immediately defended by activists and by state authorities who terrorise the headmaster of the given school. I fully support the headmistress in this case, hijabs do not belong to Czech schools," said Klaus junior in front of the court.

Supporters of the school headmistress verbally assaulted the student who lodged her complaint. "Why are you wearing a scarf, since you are a Czech?" yelled one of the present women at the student. Other demonstrators shouted at the student that she should "go back to where she has come from". The student was born in the Czech Republic.

Two students left the Secondary Health Service School in Ruská Street in 2013 because the headmistress banned them from wearing scarves.

According to the headmistress Kohoutová, the School Regulations do not allow the wearing of scarves on the premises of the school.

The Czech Ombudsman Anna Šabatová pointed out that the student has been the subject of discrimination. The School Regulations are in conflict with the constitution of the Czech Republic, the Czech Education Law and the Czech Anti-discrimination law. Her comments have been met with strong protests. 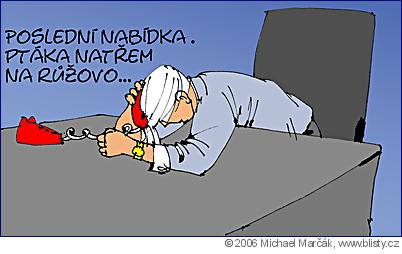