Bolsonaro will easily destroy the Amazon

Photo: Guedes and Bolsonaro
Brazilian President appointed Attorney General who promised to not prosecute environmental crimes
In another move towards the unashamed project of destruction of the Amazon, populist far-right Brazilian President Jair Bolsonaro has caused uproar among federal prosecutors and all members of the Justice system after deciding to break a tradition of decades and, instead of picking one of the names from a list of three prosecutors chosen by their own peers for the top position of the category, the "caudillo" chose an outsider who promised to stop all prosecutions of people who broke environmental laws. Effectively, Bolsonaro is once again signalizing that the destruction of the rain forest for agricultural and wealth exploration is no longer a punishable crime.

Various past recordings emerged, where Bolsonaro clearly declares that Native Indians should not exist. He says that Americans made only one mistake, which was not to decimate all Indians. During the Brazilian military dictatorship (1964-85), Bolsonaro was part of a force that expelled tribes from their lands and put Indians who refused to work in jail.
If the international powers do not act swiftly, within the next 4 years the 900 thousand Native Indians who are still in existence may be exterminated and/or forced into urban society. A few weeks ago, a Native Indian tribal chief was brutally murdered by gold diggers (his eyes were taken out while he was alive, his genitals were cut off and put in his mouth and then he was drowned), but Bolsonaro declared he believed the elderly Indian was murdered by his own tribe just to cause media commotion. The police agents sent by the government to investigate the case decided there was not enough evidence of a murder, even considering it could be suicide! Hundreds of Indians have been exposing the now constant invasion of their lands and the collaboration from the police received by the criminals. When gold diggers burnt down the vehicles and the headquarters of an institution that cares about the Indians, the government and police celebrated the criminals as heroes!
It will be too late if we wait for the political winds to change course in Brazil, because no matter how many absurdities Bolsonaro does, he still has wide support from the population.
Just like with Donald Trump and other populists across the globe, it seems that large portions of the electorate actually want their leaders to act without empathy, with cruelty and disregard of all previously sacred principles, as a sort of punishment against ages of previous political leaders and demagogues whose promises never materialized and who often ended up doing the opposite of what they proposed. The excesses of political correctness and the failures of traditional politics fed the disillusionment that brought all these false prophets to power.
In this context, even though many Brazilians disagree with specific decisions or things said by Bolsonaro, he still counts with ample support and has announced he will run for reelection in 2022, with his son Eduardo considering following up in 2026. Last week, Eduardo, who was named Ambassador of Brazil in the United States by his father (awaiting Senate approval), went for a quick visit to Donald Trump in the Oval Office, wearing a baseball cap written "Trump 2020". After the meeting, he announced that America will be a partner in the exploration of the Amazon for commercial purposes. Brazil is opening the rain forest for exploration by American companies and is also ceding a part of its Northern-most territory for a military and space program base (in Alcântara, considered the best place for the launch of satellites).

After Bolsonaro evidenced his male chauvinism by poking fun at the looks of French President Emmanuel Macron's wife, the Minister of the Economy Paulo Guedes said this week that there was nothing wrong with that offense, because, according to him (who is, by the way, very ugly by any aesthetic standards, as you can see in the attached photo...), "she is indeed ugly". This kind of obvious lack of decency is shared by most members of Bolsonaro's team. Bolsonaro himself has already used the Parliament's microphone to say that one of his female colleagues was so ugly that not even a rapist would want her and he invariably offends female reporters with sexist attacks about their looks or age.

The transformation of Brazil into an authoritarian regime is in full course. Now, in his declared purpose of turning Brazil into a militaristic nationalist country, Bolsonaro has mandated the change of hundreds of schools into military schools. That means the students will have to wear military uniforms, practice army exercises, play with firearms and will come out of the course as members of the military. Already 216 schools have been "adapted". Instead of teachers, army personnel will manage these schools.
Following the manual of any authoritarian regime, all grants for scientific and cultural studies have been cut off, Brazilian researchers all over the world had their funds cancelled, faculties of Arts, Philosophy, Sociology, Anthropology and History are to be eliminated or have their funds minimized. The government department for fomenting cinema has been ordered to cancel all investment in films dealing with LGBTQ racial or female issues. The president of the institution resigned after Bolsonaro himself decided to choose which films should be funded. The new head of the institute (Ancine) is an economist who says films with Christian and family-oriented themes will now be the only beneficiaries of government money.
To complete the obvious transformation of Brazil into a veiled dictatorship in the style of Venezuela (where the independent critical media was shattered, opposition leaders are jailed or killed, the judicial system filled with collaborators, with militias and the police forces in tune with the government), many important journalists, who have been openly critical of the President, have been fired after pressure from Bolsonaro. He blackmails the media by cutting off the substantial amounts of advertising from the government, that is often responsible for about half of the overall income of TV and radio stations.
Events like policemen brutally beating people who dare to protest publicly against Bolsonaro have become common. The often fatal beatings of transsexuals and homosexuals are now daily occurrences and the police is not acting against the violence being committed against minorities. After a couple of decades with strong laws against discrimination of minorities, now the gates were open to those who resented not being able to expose their prejudices.
Teachers and Professors have been losing their jobs after students record them in their mobile phones saying anything that may sound like left-wing or considered in defense of gender diversity. The governor São Paulo, the richest and most important state in Brazil, has ordered the recall of 3 million school books because in a Biology chapter it says that people are born with genitalia that is male or female (even though, to be exact, some have both, like hermaphrodites, some are even born with no sexual organs), but adding that gender is how the person feels about his or her sexuality. Nothing other than informing 8th grade students about the reality. To pretend that there are no transsexuals, homosexuals or variations of sexuality is to lie to adolescents, it is to allow them to grow up ignorant of a reality and thus introducing discrimination and prejudice. Unfortunately, many so-called conservatives have the erroneous and naive fear that children will be "influenced" by this knowledge and may "decide" to become gay or to change their gender. This simply doesn't happen. In all those cultures where this debate is a thing of the past, like the Scandinavian nations or Canada, there was no increase in the amount of gays, lesbians or transsexuals as a consequence of gender differences being part of the school curriculum. Nobody is influenced in their sexual identity. What teaching about gender does is to allow those who are born different to not suffer discrimination.

However, this fear is behind Bolsonaro's election, because his main campaign topic was that he was going to eliminate gender studies  from schools and government. Copying the White House, Bolsonaro has mandated the erasing of all mentions of gender from any government material or program. Bolsonaro has also asked gay foreigners to not come to Brazil for tourism, while adding that men who would like to have sex with beautiful Brazilian girls are welcome instead.
The vast array of daily absurdities said and committed by Bolsonaro and his team is extensive and mirrors his idol, Donald Trump. Not only by accident, because Steve Bannon, who is one of the media manipulators that helped, often with fake news, to elect the supposedly billionaire reality show host, is officially working for the Brazilian government. Bannon advises Bolsonaro and his sons on political strategies such as spreading fake news and never admitting they were wrong, insulting the media, saying extremist opinions, offending foreign governments and demonizing anything related to he Left, with a special focus on the LGBTQ community.
With this well known manual coming from Trump, Bolsonaro is certainly going to accomplish the most devastating destruction of not only the Amazon rain forest, its Native Indians and all those unique animal species that live there very fast, but of freedom of the press and respect for human diversity. Considering the balance of power of the world today, with the most powerful countries being ruled by lunatics, there is very little hope that Bolsonaro will be stopped in his destructive and primitive goals.
Brazílie | Globální oteplování | Genderová nerovnost ve společnosti
0
Vytisknout
2876 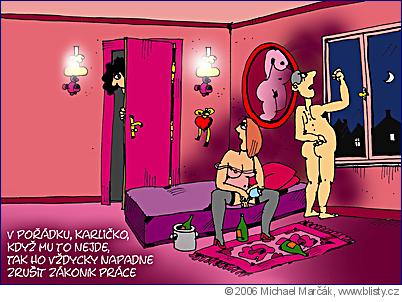