Czech social democratic Prime Minister Bohuslav Sobotka said on television on Sunday that "the immigrants entering the Czech Republic are doing so illegally". His statement was in conflict with the law, according to which no one can be seen to have committed a crime entering the territory of a country. According to international law, an overwhelming majority of the refugees which the Czech Prime Minister characterised as "illegal", have the right to be treated as victims of war.

"Europe is governed by incredible fools and opportunists. I know them well. Brussels is run by idiots," says former Slovak diplomat, MP and writer in an interview with the controversial Czech website Parlamentní listy.

"I have a metaphor to describe the refugee crisis. Someone has made a hole in a bath tub and water is running out. What does a normal person do when water is running out from a bath tub? A normal person will try to block the hole. And yet European politicians are running about thinking 'What should we doing about the water running out of that hole?' They are fools and opportunists of the highest calibre. I know them well, I used to sit with them in the Council of Europe and in the NATO Parliamentary Assembly.

I want to send a message to Mrs. Merkel - the more refugees you accept, the more you will worsen their situation. Because no one wants to leave their own country and European politicians are tempting them to do so.

Friends from Germany have been visiting me here in Slovakia and I asked them 'How do the Germans accept the refugees?' They replied: 'In Germany, we are victims of gross propaganda, people in Germany are angry and television shows how in Munich refugees are invited with open arms. It is terrible censorship.' We must stop the refugee flows. In this, I fully support [the Slovak PM] Fico and [the Hungarian PM] Orbán. Once a Syrian refugee in Slovakia learns that his brother in Germany is receiving 500 euros while he is getting only 50 is Slovakia, he will of course immediately move to Germany. Hence refugee quotas are total nonsense.

Merkel is doing this under pressure from the USA and also she thinks that these unfortunate people will do menial work for the Germans. Most of the refugees are young, healthy strong men. This means that someone is trying to destroy Europe because once Germany is destroyed, Europe will be destroyed. I hereby tell Mrs. Merkel that she is killing Europe.

Former European colonial countries have turned their former colonies into basket cases. Half of the population of the world lives under the poverty line. They are all potential refugees. But it is not the fault of the Slovaks, Hungarians, Poles, Czechs or Austrians. They have never exploited any colonies. Why should we be forced to solve problems which we have not created? The English have similar views. In England, there are now fan clubs of Vladimir Putin. The media will of course suppress this information."

The interview has been shared on Facebook by more than 6000 readers.

Josef Banáš worked as a diplomat for the pre-1989 communist regime, in 1990-1992 he was deputy ambassador of Czechoslovakia in Vienna, in 2002-2006 he was a Slovak MP, later he was head of the Slovak parliamentary delegations to the Council of Europe and to the NATO Parliamentary Assembly. He worked as Deputy Chair of the NATO Parliamentary Assembly. He is also a writer of fiction. In Slovakia, he has been accused of acting as an informer for the communist secret police before 1989.


Should hate group "We Don't Want Islam in the Czech Republic" really be called fear group "We've Never Met Muslims & Assume They're All IS"?


My interview on anti-foreigner sentiment in Czech Rep got 100s of hateful comments directed at me. Proves my point. http://t.co/0fEMZJNHzV

"NO TO IMMIGRANTS" - ad on popular Czech website, sponsored by hate group "We Don't Want Islam in the Czech Republic" pic.twitter.com/6aIhhO9ZZ7

"A serious threat and a great victory!" says Czech commercial Nova TV, pointing out that on 11th and 12th September 1683 the troops of the "Holy League" defeated the Ottoman Empire near Vienna, thus stopping the expansion of muslims further into Europe.

In the second half of the 17th century, Europe found itself in serious problems due to being exhausted by the Thirty Years' War. The Ottoman Turks used this, occupied the Balkan Peninsula and more than half of Hungary and were planning to destroy Austria.

"That would have meant a catastrophe for Europe," says TV Nova, clearly implying contemporary resonances. The Ottomans, who were muslims, would have conquered Central Europe.

From 1683, Vienna was besieged by "138 000 bloodthirsty muslim soldiers. They wanted to starve the city and then convert its inhabitants to islam or to massacre them mercilessly."

While most Czech media - and Czech politicians - display only passive distrust and hostility towards refugees, there is one highly popular website which actively disseminates anti-refugee hatred, which is usually based on alarmist and unsubstantiated material. The populist website Parlamentní listy (The Parliamentary Newsletter - this is a misnomer, it has nothing to do with the Czech parliament) prides itself on "giving space to all views, right or left". What this in fact boils down, is that mostly the website published ludicrous, shocking "views" with no basis in reality. While the website will occasionally publish a pro-refugee interview, its anti-refugee coverage is overwhelming. The rare publication of an opposite view serves to legimitise its anti-refugee propaganda and to persuade the readers that the views disseminated by Parlamentní listy are legitimate, objective and impartial.

It is Parlamentní listy which has over the past two or three months legitimised and normalised fear and hate against the refugees in the majority of the Czech population. It also spreads absolute, paranoid nonsense on other topics. For instance, today, on the anniversary of 9/11, it has published a "view" that the WTC in New York could not have collapsed under the impact of two air planes. The website sees conspiracy and danger everywhere.

The website is read by more than 600 000 Czechs per month, which is more than 6 per cent of the Czech population.

The main shareholders of this commercial venture are Michal Voráček, the founder of the Czech Ringier and of the main Czech tabloid newspaper Blesk, and Ivo Valenta, the wealthiest man of the Czech gambling industry , owner of the gambling conglomerate Synot. Valenta has Monaco citizenship. In 2004, he was fined for encouraging corruption in football management.

Lidové noviny has recently said about Parlamentní listy: "The website creates an extraordinarily deformed environment which encourages populists and radicals. Its journalists are not trying to describe reality or seek the truth, but they use topical, politically sensitive events in order to strengthen their own prejudices and stereotypes in the general public."

Here is a list or recent Parlamentní listy headlines. It would appear that a large part of the Czech public now regards these headlines as absolutely normal. They think that publishing unsubstantiated, paranoid "views" conforms to the principle of free speech:

- Václav Klaus in Bratislava: These are not refugees, do not call them thus. That word is a naivist, European concept

- Colonel Skácel on 9/11: Two high rises could not have collapsed after being hit by airplanes. Absolute nonsense. Terrorism is a myth

- Europe will go black. Fuck it, swore citizens during a meeeting. And the Czech immigration boss suprised people "We do not moan, so we will be punished."

- Billions of immigrants. Horrifying chaos, conflicts, war and death and catastrophe in Europe. Someone is organising this!

- 100 million immigrants will arrive, according to estimates. This is the end of Europe. The government must rebel against the threats and the crude blackmail from the EU

- Sociologist Petr Hampl: We have the right to deal with the refugees as though they were aggressors. The traitors of the Czech nation are helping them to exterminate us like the whites have exterminated the Red Indians. The Czech Human Rights Ombudsman, she is the real neo-Nazi

- This is death. There will be bloody tragedies. Hatred of the Czechs, monstrous behaviour, treachery, suicide, collaborators, chaos

- Lord Mayor in a Berlin immigration quarter: The immigrants rule us with a rod of iron and terrorise German children, adults and pensioners. They teach their offspring to fight against us

- Disgusting, we must leave the EU. Czech politicians' reactions against the quotas

The server also runs an ad campaign for the new anti-immigration political coalition in the Czech Republic:

"Surely there is enough food for everyone. Stronger people are supposed to help the weak. If we failed to help the refugees, we would not be any better than the slimy creatures with three heads who live on Planet NO," said Czech public service TV in a popular children's programme and has therefore become the subject of strong criticism from Czech viewers for an alleged lack of impartiality. Commentators on Facebook which have shared the programme condemned its manipulation and propaganda.

"This is such propaganda of which even Joseph Goebbels would be proud. I have sent a complaint to the Czech Council for Radio and TV broadcasting. I recommend that other people do the same, otherwise we will soon be very surprised by the content of TV programmes for children," said one angry parent.

On a Czech news website, the question "Do you support the fact that Czech TV said that people should help the refugees?" has been answered "No" by 91,8 per cent of readers. More than 26 000 readers have voted so far. 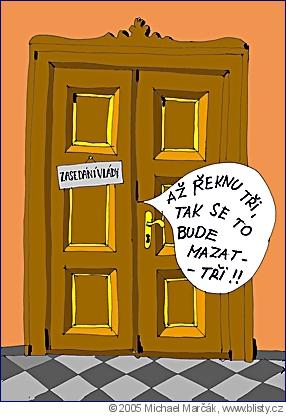