She Came, She Saw, She Intervened: A Czech Anthropologist on Svalbard in a New Feature-Length Documentary by Veronika Lišková

Svalbard (aka Spitsbergen) is an Arctic archipelago not too far from the North Pole. The archipelago was discovered in 1596 by Willem Barents and remained a no man’s land until 1920, when it came under the Norwegian jurisdiction.

However, Svalbard still enjoys a bit of a special status. Citizens of the countries that have signed the Svalbard Treaty of 1920 can become residents on the archipelago and do not need a work permit to be gainfully employed there. Currently there are 46 such signatories, including the Czech Republic (as a successor state to Czechoslovakia, which joined the Treaty in 1930).

The archipelago may be known to the Czech audiences from Tomáš Sniegoň’s 2002 documentary Špicberky – Za půlnočním sluncem (Svalbard: To See the Midnight Sun, 27 min, https://www.ceskatelevize.cz/porady/1095875447-cestomanie/203562260100012/ ), made for Cestománie and, among other things, promoting Svalbard adventure tourism. Zdeněk Zvonek’s 2021 documentary Čestí vědci v tající Arktidě (Czech Scientists in the Melting Arctic, 52 min, https://www.ceskatelevize.cz/porady/12289241530-cesti-vedci-v-tajici-arktide/ ) covers the activity of the Czech Arctic Research Station in and near Longyearbyen, Svalbard’s administrative centre, in the time of global warming.

Veronika Lišková’s 2022 documentary Návštěvníci (The Visitors, 83 min), screened at the Tromsø international film festival earlier this week, also deals with the consequences of global warming but from a human perspective, not nature’s. Her protagonist, the social anthropologist Zdenka Sokolíčková, arrives in Longyearbyen with her family (a polar ecologist husband and three little children) to study the effects of climate change on Longyearbyen‘s local community of about 2 500 inhabitants, consisting to a notable degree of coal miners, polar researchers (Longyearbyen has its own university) and tour guides.

Thanks to the Svalbard Treaty, the town dwellers comprise over 50 nationalities and up to 20% of children in local schools are non-Norwegian. Mindful of the need for the green shift, the Norwegian government has made a decision about phasing out coal mining from Longyearbyen. For these reasons, Svalbard is regarded by some as «particularly ideal for the creation of a post-national zone and future testing ground for local, self-sufficient, experimental communities consistent with eco-cosmopolitan notions of planetary sustainable citizenship» (according to the Danish visual artist Eva La Cour writing in 2021). After staying in Longyearbyen for many months and interviewing hundreds of community members, Zdenka discovers that, at least at present, Longyerabyen does not quite conform to such a Utopian vision.

Take, for example, the green shift. No one denies that coal mining is a major polluter. Yet coal miners and their families have historically been the backbone of the local community. What will happen when the last operating Norwegian mine is shut (as projected later this year) and the workforce (including local businesses that depend on the coal mining industry) – an estimated 10% of the townsfolk in total – will have to leave (you cannot really stay on the archipelago without a job)?

Local economy is expected to profit from the fast-growing tourist industry instead – but is it really a greener alternative? Some of Zdenka’s respondents do not think so. Suffice it to mention the Longyearbyen-based conceptual artist Stein Henningsen (http://steinhenningsen.com ) who cites the high number of commercial flights per week, in and out of the Longyearbyen airport, and large tourist crowds brought in by cruise ships during the midnight sun period. Besides, Svalbard’s dependence on seasonal tourism is bound to make the local community fluid, formed of either short-term visitors (hence the film’s title) or long-term tourists (as Henningsen puts it) and turn the archipelago into a kind of Swiss ski resort with polar bears.

Then there is an issue of Svalbard’s non-Norwegian residents, especially those from outside the EU/EEA, often noticeable in Longyearbyen‘s service sector. According to the film, the central Norwegian government does not make it easier for such individuals to integrate into Norwegian society, as it does not wish to turn Svalbard into a backdoor entrance to Norway.

As a foreigner, your length of stay on Svalbard does not count for very much. Thus, on mainland Norway, non-Norwegians can vote in local elections after three years in the country. By contrast, on Svalbard only those non-Norwegians can vote in local elections who have previously spent no less than three years on mainland Norway. This is how the possible foreign influence on the local self-rule is kept in check. Another problem is foreigners‘ lack of fluency in Norwegian. Some locals complain about it (the film, incidentally, runs in a mixture of Czech, Norwegian and English that serves as lingua franca). Yet when Zdenka helps to organise Norwegian classes for beginners and 60 people sign up, no organisation in town is able or willing to let a suitable room for the language course.

This is an example of how Zdenka finds it increasingly hard to remain a dispassionate observer and tries occasionally to do something to help her interviewees. More often than not the assistance is not really practicable, over and beyond an opportunity for the respondents to talk about their sometimes insurmountable difficulties. At one point Zdenka is even shown breaking down in tears upon hearing one of her informants‘ stories. Zdenka’s Norwegian mentor (unnamed in the film but identifiable as Professor Thomas Hylland Eriksen of Oslo University), when speaking to her online, advises her not to mix research and social work (which under the circumstances is easier said than done).

Veronika Lišková, whose debut feature-length documentary Danielův svět (Daniel’s World) won an audience prize at the Ji.hlava international documentary film festival in 2014 (for a contemporary review by Sam Graeme Beaton, see http://czechfocus.cz/art/75615.html), met Zdenka when they both did cultural studies at Prague University in the 2000s. Perhaps owing to this old acquaintance, the access Lišková has got to Zdenka in Návštěvníci is rather rare for a documentary. Not only there are scenes in the film shot in Zdenka and her husband’s marital bed (no adult content, just chit-chat), she even goes skinny-dipping in front of the camera, after a stint in the sauna!

Some things, however, are neither discussed nor shown in the open, e.g. Russia’s continuous presence on Svalbard since the early XX century if not before, with the town of Barentsburg as the current alternative administrative centre. Even though Russia is a Treaty signatory, too, it claims that its seafarers known as Pomors had discovered Svalbard long before Barents, and therefore considers the archipelago its own and would not mind having it all to itself.

This is what presumably is hinted at but not spelled out when it is said in the film that Oslo has to take specific geopolitical decisions about Svalbard. Apart from the income from coal and tourism, the archipelago does not actually generate a great deal, while almost everything that its population consumes and turns into waste is shipped in and out of Svalbard. This does not look like a very attractive business model. Yet if Norway pulls out of Svalbard, who or what will come in its place (one respondent asks)? This is not a rhetorical question and Norway continues to take its Svalbard obligations seriously.

Lišková’s film comes in the wake of a strong tradition of (multi)national documentaries about Svalbard (it’s co-produced by the Czech Republic, Norway and Slovakia), as well as the science documentary genre in general. Although (or maybe thanks to the fact that) the director does not have a previous Svalbard (or Arctic) experience, she has managed to come up with something genuinely original. It is not only that she successfully combines the popular modes of „illustrated lecture“ and „scientist as explorer“ (to use the terminology coined by Christopher Kustusch in 2007).

Since few Svalbard science documentaries are as long as Návštěvníci (which also took four years to make), the film allows to follow research as a process rather than a result, and avoids superficiality when revealing the local community’s tribulations. Furthermore, to the best of my knowledge, none other film in the same category focuses on someone who is not a carthographer, geologist, glaciologist or space physicist (invariably a man) – but a social scientist and a woman at the same time. Women’s contribution to life in the extreme North, whether they are scientists or not, has been underrepresented in the media worldwide, anyway, and Návštěvníci is a significant step to redress that.

Last but not least, the film is about an outsider wishing to help the community she has come to stay with and study – frustrated that she cannot do enough to improve their situation. Social scientists often have a harder time on Svalbard by comparison with their polar researcher colleagues because locals are not too enthusiastic about intrusive in-depth interviews, especially if different interviewers tend to ask them similar questions all over again. Yet Lišková’s film demonstrates that social research does belong on Svalbard and has an undisputed role to play in the archipelago’s uncertain future. 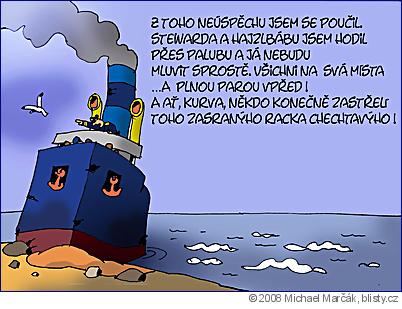