Czech Prime Minister Andrej Babiš, an oligarch and the owner of Agrofert, one of the largest industrial concerns in the Czech Republic, who also controls two major Czech newspapers, is due to visit Donald Trump in the White House next week. Babiš is currently being investigated by the EU for his allegedly corrupt practices.  In this piece, Albín Sybera provides some context about the nature of his power base and about his entrepreneurial practices.

Prime Minister Babiš´s effort to maintain an image of a Western-leaning politician is not so much about upholding the democratic standards in front of the Czech Republic’s EU and transatlantic allies as about the use of pitfalls and dark sides of democracy to secure one’s own power. Last but not least, it is also about the control over the Czech and EU public funds.

When the EU Parliament passed a resolution halting the payment of subsidies to the companies linked to Agrofert (owned by Andrej Babiš and recently managed by a fund set up by Babiš) debates surrounding the Babiš’s monstrous conflict of interests have acquired a more European dimension.

(A Czech version of this article is HERE)

In one such interview, aired on the Czech Radio, Martin Pýcha, Chairman of the country’s Agricultural Union, pointed out that the whole situation led to the politicizing of the Czech agricultural industry, where Agrofert is the dominant player, and sheds a negative light even on the small agricultural farms with no links to Agrofert (full interview available HERE).

Pýcha further noted that from his own experience one man possibly cannot influence all the various controls and decision-making levels which the processing of EU funds entails. This is as far as Pýcha’s argument is indeed quite correct.

To use an example from the last completed EU budget cycle (2007-2013) the second largest operational program (OP Environment or OPE through which approx. the allocation of 5 billion EUR was to be channeled into the country) was administered by the Czech Ministry of Environment, State Environmental Fund, Nature Conservation Agency and all these government agencies were using regional offices. We are speaking of hundreds of officials administering the applications, ensuring it contains all the required information, checking the public procurement laws have not been violated, and their superiors setting up criteria and communicating with the European Commission and its agencies.

It is indeed quite impossible for a single human being to influence such a multilayered state apparatus. The situation, however, is quite different for a man who can control a fully loyal political movement which may be novel in name, but in reality contains a good deal of members with extensive experience in kleptocratic practices running all the way back to the 1990’s (a good example of these is well described in the article „Demokracie nepřijde“ This article, published in Czech, argues that the Czech political parties have been taken over by local vested interests and calls for citizens to reclaim them and turn them back into normal democratic political instutitons have gone unheeded).

In the case of Babiš,  we are speaking of a man with vast experience and deep understanding of the government agencies distributing Czech and EU public funds which he acquired together with his top and long-serving managers in nearly two decades of doing business involving state incentives and subsidies.

To use another example, the current Minister of Environment Brabec is surely familiar in great detail with one of the largest multi million EUR projects aimed at reducing air pollution (in a country with one of the worst air pollution records in all of the EU) and administered under the OPE scheme. Before becoming the Minister of Environment in January 2014, Brabec served as the CEO of Lovochemie in the years 2005-2011, one of the largest chemical plants in the country and owned by Agrofert. Lovochemie carried out significant investments in modernizing its facilities (Lovochemie is also one of the largest polluters in Bohemia), and these were co-financed from the OPE before Brabec was appointed the Minister. It is worth noting that another significant chemical plant Synthesia, also owned by Agrofert, carried out a similarly extensive modernization thanks to the co-financing from the OPE.

A similar would-be collusions occur in the Czech media and cyberspace, as the recent analysis released by the Czech Elf group points out. Support for Andrej Babiš is vociferously propagated through chain emails and disinformation websites at times when negative information about Babiš, such as his son vacationing on the shores of Russian-annexed Crimea, leaks into media. These also happen to be the periods when news outlets such as MF Dnes or Lidovky, belonging to the fund set up by Babiš, are by and large mute to these stories or inform about different issues altogether. After all, these are supposed to be serious media immune to the questionable practices of the disinformation websites.

This whole process is something that is played out as democracy, but also something for which democracy itself has become an instrument. According to this logic, those capable of managing a chemical plant have ideal predispositions to understand the field of politics which is of significant concern to chemical plants, i.e. environment. To be a successful applicant, you or the person filing up your application for a subsidy, need to be well acquainted with the functioning of the government agency administering the subsidies. The longer you do business in this field, the more you know these agencies as well as its employees. You become the real elite and in the end you take over the posts at the government agencies with the help of the anti-establishment themes put into discourse by the media branch of the corporate organization you belong to.

Nobody needs to breach any rules when in fact these rules can be applied so well. All we have to do on our political agenda is to make the government agencies more efficient in their own tasks. State employees receive their salaries, chemical plants are modernized (whereby making them more efficient as well) and to top it all these will even pollute air quality less then before. Why meddle with this democratic tale when we have learnt to work it so well?

To use the words of former Minister of Defense Vondra, neither of the two populist politicians and top state representatives President Zeman, nor PM Babiš can destroy the idea of democracy the late President Havel had helped to introduce into the Czech Republic (A Politico article on the anniversary of Havel’s death available HERE). It just so happened that democracy in the Czech Republic has become an exemplary hollow democracy. 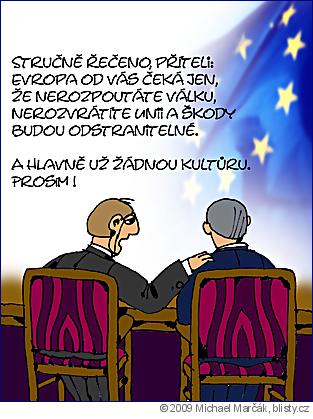