Bringing Up Girls in Bohe#metoo

Czech writer Michal Viewegh: Thank God that I have been born in a country where I was able to touch up my female schoolmates

In response to the Brett Kavanaugh hearings in the US Senate, the Czech fiction writer Michal Viewegh, the author of many popular Czech Bridget-Jones-like novels, published the following comment in the Czech daily newspaper Lidové noviny:

"I have recently read in the papers that a 53-year-old US Supreme Court nominee Brett Kavanaugh has been airily accused by his schoolmate Professor Christine Blasey of pushing her, in 1982, into an empty room, lying on top of her, putting his hand over her mouth, touching her up and unsuccessfully trying to undress her, while a mate of his allegedly 'drunkenly jumped about on them'... Well, then.

"Saying 'Well, then' enables me to fall on my knees, clasp my hands and thank God that I have been born in a country where as a teenager I was able to touch up my female schoolmates without jeopardising my future career because none of those girls has been such a North American cow as to  reproach me today with this innocent, secondary school petting.


"This toxic connection between a pathologically overgrown US feminism and the excessively powerful US judicial system (probably also the result of [the accuser's] untreated menopause) should be a warning to all Czech men: Take note that if the legal powers of politicians, businessmen or bailiffs become excessive, this always produces an explosion of injustice. And this is particularly true about the excessive power of feminism. Have you heard, gentlemen, that this year's winner of the Miss USA competition was, as a result of the #MeToo campaign, for the first time in ninety-seven years, not permitted to appear in her swimming costume? This is a fact! It looks as though next year, the female candidates for the prize will not be allowed even to show their faces and the winner will be decided on the basis of the elegance of their compulsorily recyclable clothing and the beauty of their bio-veils (and naturally, also on the basis of their gender activism)..."

"in your last piece you write that 'to push [an unknown woman] into an empty room, to lie on top of her, to touch her up, to try to undress her and to put your hand on her mouth' is, in your view, 'innocent secondary school petting'.
"To call behaviour which displays evident characteristics of the criminal offence of rape as 'innocent secondary school petting' requires a large dose of ignorance and a very strong stomach. No one minds innocent petting because 'innocent' behaviour presupposes mutual consent. And know well that even a Czech idiot will recognise that the woman in question has not given consent to his behaviour if his pals need to pin her down while he is touching her up.

"In the Czech Republic, sexual violence did not use to be mentioned at all. Its victims preferred being silent. They were silent because they were afraid to speak out, due to an atmosphere created by people like you. By people like you who say that to touch up other people against their will is normal. That to try to undress someone by force is a fantastic experience for which we should be thanking God.

"And if the woman complains, she is suffering from excessive  feminism and she is a 'cow', as you have literally said. By making light of criminal offences and by insulting those victims who have spoken up, you have created the impression in society that rape is in fact an innocent joke. Basically, it is a part of our culture, isn't it.

"Attempting to normalise crime is a deeply antisocial manifestation of a sick mind. I wonder how you would react if your daughter came home from a school party and said 'Some men dragged me into a room, they touched me up and tried to undress me, but I managed to escape.  In the light of one other article you have written, in which you say that you wanted to beat up a man who was looking at your daughter's cleavage, I would think that your reaction would not be 'Thank God that I live in such a wonderful society where this can happen.'

"We live in a society where the victims of some criminal offences are afraid even to speak about these crimes and they never report them to the police. In my work I have met dozens of women who have been raped and they have never told anyone about this. The offenders have thus remained unpunished. Why? The women were afraid that would be told they are hysterical harridans. Also thanks to people like you."

Amnesty International: In the Czech Republic, 7500 - 20 000 women are victims of rape each year. The police normally do not act against these crimes. 35 per cent of Czech women have experienced sexual violence (source in Czech HERE)
Genderová nerovnost ve společnosti | Česká literatura | Česká politická scéna
0
Vytisknout
6019 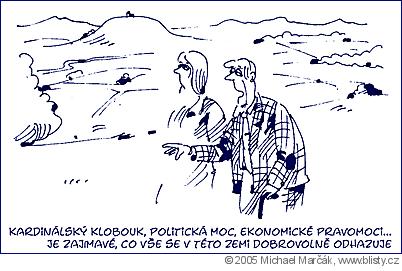