Films about racism in the Czech Republic

On Sunday afternoon, DKO2 was packed out for two premiers dealing with the continued problem of racism in the Czech Republic. The documentaries on show demonstrated two different, yet effective ways of capturing their protagonists on screen, and in conveying a strong societal message to the audience.

The half-hour long Za Adolfa by žádní morgoši neměli žádný práva (If Adolf Hitler Lived there would be no Rights for Gypsies, dir. Apolena Rychlíková and Martina Malinová) which opened the screening is ruthless in getting the point across. Based on the story last year of a Roma mother giving birth to quintuplets, the film captures the everyday life of the mother as she takes care of her children. Narrated over these images are comments from various news sites left by members of the public, all of which are incredibly racist in character. "These kids will never work" opines one, while others demand to know how much money the mother is receiving from the state. Roma people are described as "parasites" that "deserve to be shot"; deeply unsettling sentiments made even more so by the camera's panning over the children, capturing their emotions. The intention here is to ram home the idea that Roma people are real people, not the cartoonish monsters that have been demonised by sections of society, and even young children are not safe from the poison of racists hiding behind an internet connection (who have yet, ironically, signed up to post on these comment sites with their full names and locations -- exposed in the top left-hand corner of the screen). The documentary, we are told, is unlikely to be publicly screened, and will instead be shown at special events in the Czech Republic and abroad. It has been made in coordination with the `Ne rasismu' initiative, with more information to be found at nerasismu.cz.

A different angle is explored by Malinová in her film Několik let (with the English title of Let's Block), a product of her involvement as both a director and activist. The story bases itself around the plans for a group of Roma rights campaigners to blockade the pig farm in Lety, which is on the site of the former concentration camp for Roma people during the war. Over the years there have been numerous calls for the farm to be shut down out of respect for those imprisoned, but so far nothing has been undertaken. The attempts by Miroslav Brož and his group to change this are documented during their week-long blockade by both the camera and the group's messages put out on Twitter and Facebook. The latter part was particularly clever -- the tweets and message shown on screen are an effective means of progressing the film, and raise important questions concerning the role of social media. The messages released by the group don't always reflect the objective situation of the blockade, which lacks support and is poorly attended, and this becomes a key focus point; namely due to attempts to garner more attendees and to expand the message through activism.

As a fellow activist, you would expect Malinová to cast much more of a sympathetic eye than she does, and it is to her credit that she lets her footage speak for itself. The attempts by the activists to stop traffic on the busy highway adjacent to the farm become an object of ridicule ("we are sorry, we just need to stop you so the police come") yet as we come to understand, these ill-conceived plans are borne out of the grit and determination for Brož's protest to gain attention and achieve its stated aims. In many respects, the film is as much about him as a person as the blockade itself, crafting a portrait of the man and his honest intentions in the face of adversity. However, Několik let throws up several discussion points about the activist movement in general and its composition. During the film, we view Youtube video messages exclusively of members of the Roma community supporting the demonstration; this is despite the demonstrators at Lety being comprised solely of white Czechs.*)

We can view this in a number of ways -- that the community feels that it is unable to join in these protests out of social constraints, that Roma people are marginalised by society to the extent that their involvement is on the internet rather than a real-life physical presence, or possibly that movements being commandeered by those outside the Roma community is not sufficient in representing their aims and wishes in general. The director leaves these questions open, but balanced out by Brož's character, who comes across as well-meaning and genuine.

The large audience at the screening demonstrates that there is a clear interest in addressing the issues of racism in the Czech Republic. In addition, this film has a bright future ahead of it in terms of release and critical response, deservedly being awarded an Honourable Mention at the closing ceremony. This is no mean feat for a director who has not yet finished her studies at FAMU, and in effect was a runner-up in the Czech Joy category to K oblakům vzhlížíme, a film technically executed to a high precision with an established team. In this line of social investigation, Malinová has a lot to offer us, and should be a name to watch over the next few years if she maintains this high standard of filmmaking.

PS, 30th October 2014: Having received emails from both Miroslav Brož and Martina Malinová, I am happy to make a correction to the article. Contrary to my claim that the composition of the blocakde was solely made up of white Czechs, the blockade was in fact 50/50 between Roma and non-Roma activists. I do maintain, however, that many of these characters appear in the periphery and there is still a contrast to be made between the footage we see of the blockade and that of the social media output. I would like to stress that this was a genuine error and not an attempt to misrepresent the film. 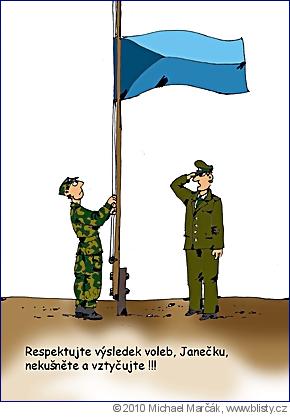