The Czech Helsinki Committee: On the further prosecution of Roman Smetana

The Czech Helsinki Committee published two statements on the case of Roman Smetana in 2012. Mr. Smetana, a thirty-year-old bus driver in the Moravian city of Olomouc, was prosecuted for drawing antennae onto the heads of the candidates from various political parties which were displayed on pre-election billboards on public buses prior to the Czech 2010 parliamentary elections. Mr. Smetana drew antennae on the poster of Mr. Ivan Langer, the then Home Secretary and a Civic Democratic Party candidate. Mrs. Markéta Langerová, Mr. Langer's wife, a judge at the Olomouc District Court, then sentenced Mr. Roman Smetana to one hundred hours of community work for "damaging other people's property". When Mr. Smetana refused to do this community work, Mrs. Langer changed the punishment to a hundred days imprisonment.

Without the use of an expert witness, and merely based on a claim raised by the Civic Democratic Party, Judge Langerová decreed that the damage to the 28 pre-election posters owned by the Civic Democratic Party amounted to 15 667 Czech crowns (USD 800). Mr. Smetana voluntarily paid this absurd sum. (The owner of the firm which made the billboards advertising politicians from the Christian Democratic Party did not claim any damages.) Mr. Smetana decided not to appeal against any of the court decisions, he refused to be represented by a defence council and even said that he does not think that Judge Langerová is biased due to her conflict of interests. The Czech Helsinki Committee is of the opinion that there were good reasons to doubt the impartiality of the judge (see also Lukáš Křístek, `The problem of the bias of the judge in the case of Roman Smetana', and Jan Vučka, `Through antennae for Justice'). The Czech Helsinki Committee welcomes this debate, of legal experts and is pleased to say that it was instigated by the actions of Mr. Roman Smetana.

On the basis of a submission made to him by the Czech Helsinki Committee on 23rd April, 2012, the then Czech Justice Secretary Jiří Pospíšil submitted a complaint against infringement of the law in the case of Mr. Roman Smetana to the Czech Supreme Court. This complaint was dismissed by the Supreme Court (see NS 6 Tz 50/2012) and Mr. Roman Smetana is currently serving the remainder of his 100 day prison sentence in Rapotice (Lesní Jakubov) prison. He is due to be released on 21st December 2012.

On 27th February 2012 the Czech Helsinki Committee released a statement commenting on the sentencing of Prague artist Roman Týc (for a public performance) and Mr. Roman Smetana. A second statement by the Czech Helsinki Committee, entitled "We are disappointed by the Supreme Court's verdict" on the case of Roman Smetana was published on 30th August, 2012.

Roman Smetana now faces two new charges of obstructing the execution of an official decision. The state prosecutor argues that Mr. Smetana committed this offence in failing to report to prison to serve his sentence on 26th March 2012. Mr Smetana did not report to prison until 21st April, 2012, 26 days after his reporting date When his prison sentence was suspended while the case was being dealt with by the Czech Supreme Court, Mr. Smetana was released. After the Supreme Court decided that Mr. Smetana must return to prison to serve the remainder of his sentence, he was supposed to report to prison on 8th October 2012, but he did not report until 16th October, eight days after his scheduled reporting date In both cases, however, he voluntarily gave himself up to the Czech Police in Prague and demanded that he should be escorted to prison. In none of these cases did he obstruct the execution of a court decision. He acted in such a way so as to attract the attention of the media to his resistance to the way in which the Czech judiciary had dealt with him. His purpose was to demonstrate to the public that a citizen in the Czech Republic can easily be subjected to an unjust prison sentence and in his particular case, under extraordinarily absurd conditions.

The Czech Helsinki Committee is of the opinion that the Czech Constitutional Court should deal with a complaint in the case of Mr. Roman Smetana because his case is of general public importance, transcending the personal interests of the complainants. Czech law allows a complaint to be dealt with if it is a matter of public interest.

The Czech Helsinki Committee will follow the new allegations brought against Mr. Roman Smetana closely and will examine their legality. Both these cases are now at the stage of preparatory proceedings (the arraignments have not yet been lodged). We will regard as significant how the courts will assess the motivation of the criminal activity allegedly committed by Mr. Roman Smetana. We will examine whether it was really Mr. Smetana's intention to obstruct court decisions for reasons stipulated by law and the lawmakers.

It will be significant whether or not the prosecuting authorities will include Mr. Smetana's media appearances and his other public activities during the time when he failed to report to prison, in their allegations of obstruction of official decisions. Should this happen, this would be tantamount to abuse of the criminal law and to suppression of freedom of expression.

Chairperson of the Czech Helsinki Committee 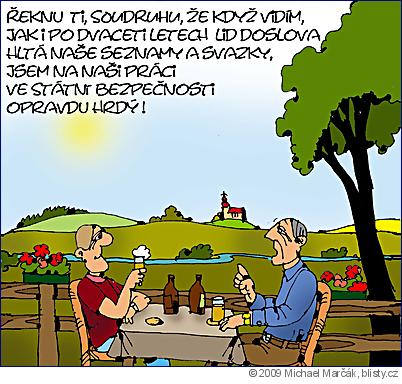