Josef Středula, the Chair of the Czech and Moravian Trade Union Confederation, has granted an interview to Parlamentní listy, a Czech Breitbart-like website that has been systematically spreading alarmist news and publishing hate speech directed against muslims and refugees in the Czech Republic.

It is a remarkable example of lack of moral and ethical values on the part of Mr Středula, which is also demonstrated by a number of Czech politicians who also cooperate with this highly questionable website.

Disseminating hate speech directed at religious groups such as muslims or at ethnic minorities and publishing unfounded alarmist news are criminal offences in the Czech Republic, punishable by three years' imprisonment. The Czech authorities, however, do not prosecute.

Will Mr. Středula tell his trade union colleagues in Western Europe that he  has given an interview to a Breitbart-like website?

- Sociologist Petr Hampl: We have the right to deal with the refugees as though they were aggressors. The traitors of the Czech nation are helping them to exterminate us like the whites have exterminated the Red Indians. The Czech Human Rights Ombudsman, she is the real NeoNazi

- Václav Klaus in Bratislava: These are not refugees, do not call them thus. That word is a naivist, European concept

- Colonel Skácel on 9/11: Two high rises could not have collapsed after being hit by airplanes. Absolute nonsense. Terrorism is a myth

- Europe will go black. Fuck it, swore citizens during a meeeting. And the Czech immigration boss suprised people "We do not moan, so we will be punished."

- Billions of immigrants. Horrifying chaos, conflicts, war and death and catastrophe in Europe. Someone is organising this!

- 100 million immigrants will arrive, according to estimates. This is the end of Europe. The government must rebel against the threats and the crude blackmail from the EU

- Sociologist Petr Hampl: We have the right to deal with the refugees as though they were aggressors. The traitors of the Czech nation are helping them to exterminate us like the whites have exterminated the Red Indians. The Czech Human Rights Ombudsman, she is the real neo-Nazi

- This is death. There will be bloody tragedies. Hatred of the Czechs, monstrous behaviour, treachery, suicide, collaborators, chaos

- Lord Mayor in a Berlin immigration quarter: The immigrants rule us with a rod of iron and terrorise German children, adults and pensioners. They teach their offspring to fight against us

- Disgusting, we must leave the EU. Czech politicians' reactions against the quotas

Read more: A Czech website which is in the forefront of spreading anti-refugee hatred

See also: Czech Republic: As if the American government advertised on Breitbart News... 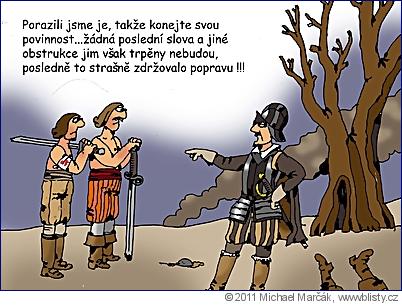