Anyone who is in touch with Czech society these days will see that there is a social conflict. There is much talk about democracy, about who violates it, about who is sycophantic to what power, about who steals more and who wants to usurp more power. But if you,  by means of digital teleportation,   rise above the small space-time continuum in Central Europe, in which this seemingly important political conflict is happening,  it all begins to look somewhat different. A handful of  dogmatists commands a small group of ideological fellow travellers. These are usually  divided into two camps in an odd fight for Czech identity. This struggle is enclosed in a surprisingly hermetic cultural space in which this feud has been going on for centuries. These are boring, countless repetitions of the same, in slightly modified constellations and with a slightly modified cast. To try hard for victory in such a war is as futile as howling at the moon. But  for the majority, it is  evidently a more fun way of experiencing their own identity than any attempt to be interested in something substantial. Apropos, have you noticed how quickly the Czech society solved the terrible threat of the refugee crisis?

Czech social discourse resembles those silly soap operas which are still capable of giving vast sections of Czech adults  a feeling that "this is about life." Thus, yet another episode of the fight for Czech cultural identity is now taking place before our eyes. On the one hand, we have the hero of the "poor" and "forgotten", President Miloš Zeman, and on the other there are  the "defenders of the legacy of St. Havel". The universe in Hobbiton revolves around this mythology, around symbols which in their warped, unrealistic form represent a more complex and multi-layered problem within Czech society. This is, sadly, only internal, because Hobbits are known to not like looking into the big world -  which however controls their destinies.

It is not necessary to describe again and again what a populist Miloš Zeman is. This is useless. Zeman and his entourage show us every day that the limits of manipulation, wretchedness and bad taste can be expanded freely, because here no actual borders exist.

But it is far more interesting what the so-called social elites do most of whom associate with the Zeman counterpart,  the myth "about Havel". Experiences of the past few days in this sense are remarkably bizarre. First, the guardians of truth and love, the threatened couple of values to whom they are trying to build a sort of symbolic Noah's Ark, have decided that some outsider from Belgium will not knock down our idols. Subsequently the Dalai Lama and state awards scandal blew up. This represents exactly a type of ignition which stirs people up for action: a vicarious problem, but within an important mythological framework which is perfectly understandable by the crowds. Once again, a small group of people has come together to demonstrate. These are, as always, the people who grow and nurture the myth of St. Havel.

I went to watch a discussion organized in the Václav Havel Library,  the so called Kroměřížská Challenge with the goal of clarifying the topic of the Czech Presidency and democracy. Again I heard  the same banalities about President Zeman, again  these same mantras which the Prague metropolitan elite wishes to hear were repeated. I heard an  inept comparison of Masaryk and Havel. I heard an inept complaint that  Zeman puts economic interests above human rights, as though this did not happen in all of the Western democracies. I heard an utterly untrustworthy repetition of Havel's name and the concept of "truth and love" by former Czech Ambassador to the UK Michael Žantovský, who only a few days previously fled the truth from the auditorium of the Archa Theatre, as if he was afraid of something.

The only person who who refused to be moved by this beautiful status of solidarity was the former diplomat Petr Kolář, who pointed out that if people from the Prague metropolitan elite want to understand something, they must occasionally travel to the regional centres of  Ústí or Karviná and come to terms with the local reality of everyday life for locals. For some of those present this was evidently an idea they heard for the first time in their lives. Even so, however, Petr Kolář failed to break away from the atmosphere of the mass consecrated to the final victory of good over evil.

It is depressing. On the one hand puppets of the East, on the other puppets of the West in a puppet theatre performing a play about a redneck and the spirit of a dead saint. No independence, no attempt to find one’s own way.  No attempt to establish a different, important agenda which would necessarily have to change the discourse.

Human society is hurtling with incredible speed towards a complex change to the conception of its own existence. Technology   acquires the cognitive abilities of man and in many ways it is beginning to surpass them. It  would be good to look where we are actually going and to try at least slightly to influence our direction  by our own will and vision.

The economic downturn of the West, a loss of our privileged position in confrontation with dogmatic Asia and the  sharply rising populism are serious problems. We could continue listing the many other problems which should be the focus of public debate, but which are not. The boring Czechs prefer to play and watch the endless rehashing of a mythological tale which slips into the form of a really stupid TV series broadcast for the solace of those who do not want to know anything. We are paying for it every day when we are willing to tolerate it. Regrettably, it looks like we do not want to give up this dubious privilege. The thing is that to be a puppet has one incredible advantage: all the decisions are made for you by someone else. Sleep sweetly.

(Translated into English by Blair Biggar) 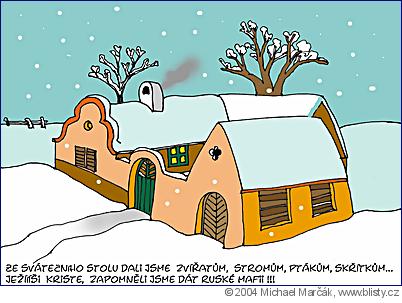