Unpleasant facts cannot be said in a democracy?

Post-totalitarian bigotry is in our cultural DNA

The intellectuals are supposed to provoke. They are supposed always to stand on the side of doubt. When an image is too neat and too “true", it is necessary to look within it for cracks and defects. Behind every image, and this applies especially in the digital age, is a code. It is necessary to understand this code and the intellectual should serve this. As it transpires repeatedly, Czech society, or rather Czech intellectual circles, cannot cope with that fact. The attempt to censor a critical text dealing with Václav Havel and with the hypocrisy of the West right on stage of a Prague theatre and the demonstrative departure of some people from the hall is remarkable proof of the immaturity and the low self-confidence associated with the Prague metropolitan elites.

Forum 2000 is a conference founded by Václav Havel. The theme of the 20th annual Forum 2000 was Our Courage To Take Responsibility. The theme was chosen well: we are really facing a crisis of politics in democratic countries. Brexit, Trump and authoritarians in Central Europe were perhaps the most publicised themes of debate in connection to this. The expression "the post-truth era" has been widely accepted, the phenomenon of utter disbelief in anything and anyone including experts. The fears that it is impossible to convince anyone by arguments, but that it is possible to enthuse the crowds by the spreading of populist lies and emotional manipulation are considerable. A call for people to take responsibility at a time when irresponsibility in politics is winning spectacularly is understandable.

Forum 2000 is not the type of conference which would bring forth provocative and bold visions. Mostly it uses a discussion format within which participants  attempt to reach some consensus. The conference tends to reconfirm views rather than disprove them. Discussions have more of a club atmosphere.

This is why during the final conference program on Tuesday evening at the Archa Theatre in Prague something happened which probably even the organisers did not expect. Belgian author Pieter De Buysser, one of the two guests of the evening, had prepared a brilliant essay about the hypocrisy of Western political culture, which has adopted similar methods of manipulation as totalitarian regimes. De Buysser showed very plausibly the lies that led to  the war in Iraq with all the consequences that this has had. He also showed how this increases the democratic deficit and how democracy is hollowed out.

At one point, however, De Buysser committed an act of "sacrilege" when in his presentation he displayed the image of Vaclav Havel receiving a reward from then-US President George W. Bush. He accompanied the picture with his commentary on the alienation of Havel's legacy from his own actions. At that moment some people such as Václav Havel Library director Michael Žantovský left the hall demonstratively. It was evidently unacceptable for them to confront the image of Vaclav Havel as a follower of truth and love with the reality, which very significantly contradicts this.

Pieter De Buysser began to read various passages from Havel's essay The Power of the Powerless, and he showed very well in them how Western policy is guilty in much the same way as the totalitarian state which Havel criticised. Subsequently something hardly believable happened. The organisers interrupted the show and for a while it looked as though the writer would not be able to continue in giving his lecture. Fortunately, support in the audience was stronger and viewers eventually demanded that he should continue. In  protest against the demystification of the image of Václav Havel, about a fifth of the spectators left.

It is gratifying that most of the audience demanded that the lecture should continue. Nevertheless, the panic attack due to the fact that someone had dared to criticise Havel's  untouchable image and had done it in an uncomfortably persuasive way, and the subsequent attempt to curtail the Belgian author's  freedom of expression was strongly reminiscent of a totalitarian syndrome. It is ridiculous to cover your ears or to try to silence thoughts which are a completely normal part of the discourse in developed democracies.

Pieter De Buysser did nothing other than transfer this discourse onto the stage of Forum 2000. He thus did what was expected from an intellectual. An attempt to suppress his lecture damages the name of the conference founded by Havel, and his  legacy. Do not let us forget that  Havel late in life, in his film Leaving, clearly and deliberately parodied himself and his surroundings. He did it exactly in order to upset all  attempts uncritically to worship him. Some members of the Prague metropolitan elite  still do not want to understand this. Thus they greatly help the populists led by Zeman. Attempts to create opposition to the populists through bigotry do not work. To take responsibility for yourself involves first of all to admit to doubts.

Translated into English by Blair Biggar 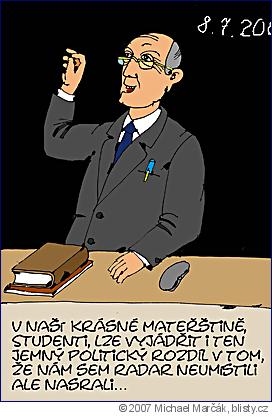