"We will shoot in the Czech government and in the Czech Parliament first," said Martin Holkup, formerly a professional soldier and a Czech veteran from the war in Bosnia and a member of an extremist right wing, pro-Russian and anti-refugee paramilitary organisation called "Czechoslovak reservist soldiers". The organisation regards Czech President Miloš Zeman as the only politician who "defends Czech interests". According to Holkup, Czech politicians should be massacred on the day they would decide that the Czech Republic should join a war led by NATO. Holkup's statement, filmed by Czech Television, has however led to the resignation of the commander of this paramilitary organisation. On the web, Holkup says that Václav Havel was the "biggest traitor of the Czechoslovak people" and calls on the citizens "to take their country back". President Zeman is the only person whose commands

The group "Czechoslovak reservist soldiers" says it has about 6000 members who network using Facebook and its Russian version "Vkontakte". The group was founded around the Czech lietenant colonel Marek Obrtel. Last year, Obrtel returned his decoration which he was awarded during his work as a soldier within the NATO missions. Amongst other things, Obrtel served in Afghanistan. He said that NATO was a "criminal organisation". By returning his decoration, he wanted to express his "absolute disagreement with the policy of the United States towards Russia, the EU countries and all the free and sovereign countries of the world."

"Czechoslovak reservist soldiers" have highly professional web pages. They have regular meetings and training session during which they use both airsoft and real weapons. They want to guard the Czech border and shoot any refugees who would cross it.

However, Obrtel said this week that he has now given up his position as the chief commander of "Czechoslovak reservist soldiers" because Holkup's statement about "starting to shoot in the government and in Parliament first" was too extreme. In his view, the organisation has disintegrated after his resignation.

An adviser to the chief of the general staff of the Czech army has warned that the "Czechoslovak reservist soldiers" may be a security problem in the future especially if they apply for jobs in the Czech army or the Czech police because they may be recruited by foreign intelligence services. 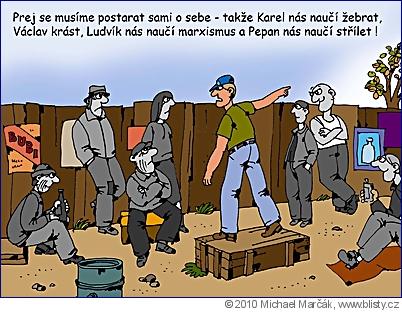