Powerful image of a Muslim policeman cuffing a IS influenced attacker. Fantastic work from the British police #YouAintNoMuslimBruv

The most (East) London response to the horrific #Leytonstone attack - #YouAintNoMuslimBruv Londoners rally together in the face of terroism.

"We cannot kill our continent in the name of humanity" - Czech deputy PM re refugees. So, kill our humanity instead? https://t.co/b0Y6og3d4B

Silly Nevada lawmaker. Everyone knows no family is safe without a tactical nuclear weapon https://t.co/eXsn2LsBKb pic.twitter.com/w3NpJmyTAH

Andrej Babiš, Czech Deputy Prime Minister, Czech Finance Secretary, one of the most powerful Central European oligarchs and leader of the "ANO" party, which rules the Czech Republic in a coalition with the Czech Social Democrats, has expressed strong support for the anti-refugee statements made by Czech President Miloš Zeman:

"I do agree with the President's view that there is a connection between immigration and the terrorists. I am convinced that the Islamic State can use the wave of refugees for its purposes. It is certainly strange that only young men come to Europe rather than fighting the terrorists in their own country. These are not typical refugees. It is quite normal that people are afraid, especially since they see that the European Union is incapable of solving the problem. President Zeman holds many very sensible views and I agree with them."

"Of course the refugee quotas are nonsensical. They are dead. I do not like when the European Union is forcing us to do various things. The European Union cannot work on the basis of the principle that the large countries ignore the small countries and they force them to do things by majority voting. The large countries do not understand that we have a different immigration policy. It is mostly  Ukrainians, Russians and Vietnamese who live in the Czech Republic. Why should the Ukrainians be regarded as  inferior to the Syrians? We are closer to them -  they are Slavs. Of course we want to be a part of Europe. But we do not want to be forced to be silent only because we are being given money. If the EU wants to take away our money and wants to abolish the free movement of people and starts talking about introducing a "mini-Schengen", that is a pathway to hell and towards disintegration."

In response to the proposal that the EU should be accepting around 500 000 refugees per year, directly from the Middle East, Babiš said:

"I can't imagine that at all. I do not know who needs more migrants, we certainly do not need them. And the atmosphere in Germany and Austria has also changed considerably, people there no longer welcome the refugees. The refugees have failed to integrate in Europe, Europe is suffering from immigrant ghettoes, the Brussels borough of Molenbeek has become a centre of terrorism, the French PM says that 10 000 radicals live in France and the German intelligence services say there are 8000 jihadists in Germany. This all is totally frightening. For God's sake, how long do we want to adhere to political correctness?

"Our topmost priority must be to stop the influx of the refugees. It is impossible to accept everyone. We must build a fence which will stretch from the Adriatic to the Baltic. We must expel Greece from the Schengen area because Greece has totally failed. It is only Hungary which has become a true Schengen frontier. We must set up a European frontier guard which will be patrolling the Mediterranean coast. But Europe is impotent and gives Turkey money so that it would take care of the refugees and  act against the people smugglers. This shows how acutely the EU needs to be reformed.

"Turkey is part of the refugee problem. Turkey fails to fulfil its duties as defined by the Geneva conventions. The refugees should seek asylum in the first safe country, which is Turkey. Turkey rejects this and does not even register them. People smuggling is a flourishing business in Turkey, the police does not act against it.

"First of all, Europe must act responsibly towards the Europeans. We cannot kill our continent in the name of humanity. In 2030, there will be more muslims in Brussels than Europeans. I cannot imagine such a situation in the Czech Republic, our people will not accept this. They want the Czechs to be a majority. When they tell us that Czechs and Slovaks emigrated to the West in several waves during the twentieth century, they do not realise that these immigrants were highly educated, could speak Western languages and were beneficial to the Western societies. Now large numbers of illiterate people are coming to Europe, they cannot speak European languages and are unemployable. And it is a big question whether they even want to work. Six billion people would like to live in Germany. Why? Because the German social welfare system is so generous.

"My firms give work to Ukrainian families. We are Slavs so I prefer to help the Ukrainians whose country is also in a crisis. Let anyone employ whom they want to employ but it must be our Czech firms that will decide this. Brussels will not be dictating to us whom to employ."

Dick Cheney honored with a bust at US Capitol today - He should be investigated for torture https://t.co/UdZPMskvd7 pic.twitter.com/k0Ibb4kmwZ 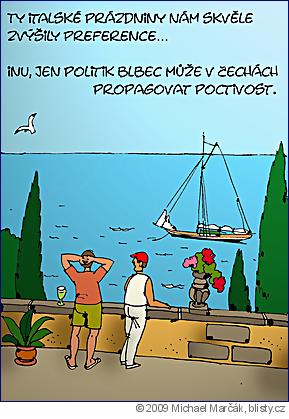