Czech Home Secretary: I am pleased that no refugees are now coming to the Czech Republic. It is probably because of our harsh approach

The migration crisis will have fatal consequences for Europe. I am frightened by the disunity of the European countries. I am frightened by the change in the attitude of the large countries. Madame Merkel by offering to accept all the refugees has moved the pendulum to the left and now signals are coming that Germany is about to go move the pendulum to the right. I do not necessarily share President Zeman's views warning us that sharia law will be introduced in the Czech Republic and people's hands will be cut off, but the President just describes what the people genuinely think. It is true that the Czech Republic currently has no refugee problem. Whether this is because we are behaving more harshly than other countries or because we are not on the immigration route, I don't know. But the Czech president uses a language which people understand. When he speaks about the migration crisis, people trust him more.

Slovakia detains some 400 refugees for many weeks. We detain some 450. Slovakia treats the refugees almost exactly as the Czech Republic. But no one criticises Slovakia because they keep quiet about it.

We must detain the refugees, including children, because they have broken the law. International covenants allow us to detain them. If all European countries adhered to the European law, no illegal immigrants would have entered the Czech Republic. Because these people would have been detained in the first safe country they have entered, they would have been registered there. With the exception of a couple of politicians, the Czech Social Democratic Party stands firmly behind me on this.

Europe must give up the notion of immigrant quotas and must hermetically seal the external borders of the European Union. Europe is a little island of positive deviation. There are three billion people living in destitution in the world. During the first stage, some twenty, but maybe sixty million of them will want to come to Europe. We must send a clear signal: Europe is not open to everyone, but only to those who really need it. We should help war refugees, but only some twenty, thirty percent of these people are escaping war. We must tell all the others that they do not have a chance in Europe, we will deport them. 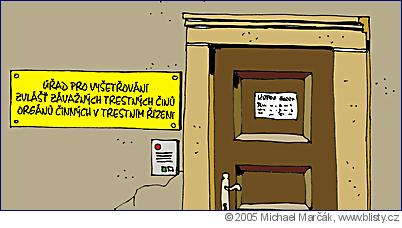